Dental fillings have been around for a long time. In fact, we know they’ve been around since at least the 19th century. In the 1840s, dentists discovered if they dug out the decayed and weakened structure in a tooth and filled it with a paste made of mercury and silver, it would harden and work like a natural tooth for years. That simple discovery transformed dentistry and saved many teeth that would otherwise have been pulled. They’ve been called silver fillings, but the reality is– they contain mercury. A more accurate term for them is amalgam fillings, and as you might or might not know, mercury can be toxic.

While the American Dental Association has said that amalgam fillings are safe, many patients are understandably uncomfortable with having mercury in their mouth. While mercury fillings have been extremely useful and have served us well for over 150 years, nowadays, we have a better way. In recent years there have been new advances that avoid the use of mercury in fillings altogether.

Specifically, two big advances in the late twentieth century changed dentistry. First, a white filling material was developed from a durable composite material. Around the same time, advances in bonding enabled the material to be bonded directly to the tooth, thereby strengthening it.

Composite fillings are more difficult to place than amalgam fillings, and in order for dentists to properly place them, they must have special training. Dr. Arnold is fully trained in placing them and has years of experience doing so.

-When we place white composite fillings, we don’t need to remove as much of your tooth structure than we do when we place amalgam fillings.

-Composite fillings bond directly to your tooth and strengthen it. Amalgam fillings actually weaken your tooth.

-They seal adjacent, vulnerable parts of your tooth from recurring decay.

-Since they’re non-metallic, they don’t conduct the hot and cold from food and beverages the way amalgam fillings do. This is especially helpful if you’re sensitive to extreme temperatures.

-Composite fillings look much more like your natural tooth structure.

If you need a filling, or it has been over six months since your last dental visit, call us at (859) 269-1000 to make an appointment, or schedule one online by clicking here. 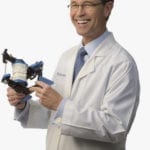